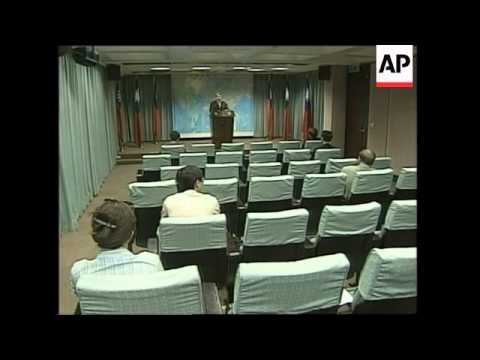 Taipei, Taiwan, 29 August 2003
6. Wide of Foreign Ministry weekly press conference
7. SOUNDBITE: (Mandarin) Richard Shih, Foreign Ministry spokesman:
“We added ‘Taiwan’ on the cover of our passports to clear out confusion. When our citizens travel overseas, people would know that we are from Republic of China, Taiwan. Customs and airlines company staff around the world would not mistaken us as coming from People’s Republic of China.”

Taipei, Taiwan, 30 August 2003
9. Cutaway cameras
10. SOUNDBITE: (Mandarin) Liu The-hsiun, deputy chairman, Mainland Affairs Council:
“This move did not change any status, this is a statement of fact. Therefore I don’t think it will cause any dispute between the two (Taiwan and China).”
11. Man collecting copies of passports
12. Man collecting passport
13. SOUNDBITE: (Mandarin) Ren Hu, Taipei resident:
“I applied early so I won’t get a copy of new passport with ‘Taiwan’ on the cover. I don’t want the new one. I think most people recognize Taiwan as a local government anyway.”
14. Copy of new passport

Taiwan’s Foreign Ministry risked angering Beijing on Monday when it issued a new passport with “Taiwan” written on its cover, a change officials said would prevent foreign immigration officers from mistaking Taiwanese travelers for citizens of the People’s Republic of China.

The old passports only have the island’s official name, “Republic of China,” a name China and Taiwan shared before the Communist Party took over the mainland in 1949, causing Taiwan to break away and resist Beijing’s rule.

The Communists renamed China as “The People’s Republic of China.”

Past Taiwanese governments had been reluctant to add “Taiwan” to passports because pro-unification Taiwanese and Chinese leaders had warned the move could be interpreted as a step toward a permanent split with the mainland.

China has long warned that it might use force to stop moves toward formal Taiwanese independence.

But many Taiwanese have complained that foreign immigration officers have mistaken them for citizens of China because their passport covers don’t have “Taiwan” on them.

China criticized Taiwan’s addition of the word “Taiwan” to its passport cover and urged other countries to back Beijing’s claim of sovereignty over the self-governing island.

You can license this story through AP Archive:
Find out more about AP Archive: