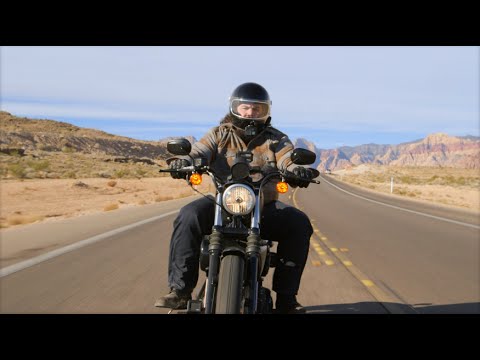 What’s more enticing to a petrol-obsessed Harley wrencher than an opportunity to get their mitts on the new 2016 Harley Sportster Iron 883? Nothing. Nothing at all in this entire world. Well, unless that review gave them an opportunity to get out of the city traffic and onto open roads that wind amongst some of the most stunning desert vistas in the country! Yeah. That would be better. For Lemmy’s Harley Davidson Sportster Iron 883 Review, that is exactly what happened.

As one of the most popular motorcycles in history, the Harley Sportster is an iconic fixture upon the highways of the world. With the introduction of the Iron 883, Harley took the lineup to a stealthy new level and they haven’t looked back since. In this review of the 2016 Harley Davidson Iron 883, Lemmy heads out to Las Vegas to showcase this gallant steel horse in an environment as wide open as the possibilities that come with the Sportster itself.

Gear Used In This Video: